I’ve used Screenshot Captor on Windows to great effect for years, and it contains a ton of features.  But one feature that I didn’t even realize that it was mssing until recently was the ability to float the screenshot after it was taken.  Lately, I’ve been using my MacBook more, and came across an application ScreenFloat.  It’s not a full featured as Screenshot Captor, but the ability to float the section that you’ve just taken a screenshot of in a transparent window has a multitude of uses.

So, for NANY 2014, I’ve decided to create a tool that can be called by Screenshot Captor to float the just taken image in a transparent window.

I’ve done much of the research into what I’m doing with the recently announced Reference Overlay Tool, so the two should be very similar.

The final version is available for download.  It requires .NET 4.0 but not much else.  Documentation to come soon.

The installation instructions are pretty simple: 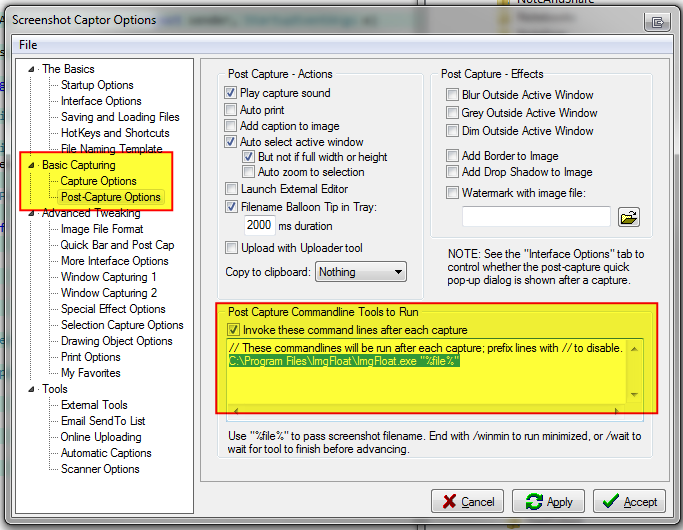 Any feedback is very much appreciated!

Permission is hereby granted, free of charge, to any person obtaining a copy of this software and associated documentation files (the “Software”), to use the Software without restriction, including without limitation the rights to use and copy the software package, and to permit persons to whom the Software is furnished to do the same. Distribution and publication shall be allowed also without direct cost to the user. In all cases shall the distribution of the software be subject to the following conditions:

The above copyright notice and this permission notice shall be included in all copies or substantial portions of the Software, and a link to the original site for the software (http://www.thinkshui.net/software/imgfloat/) shall be included in prominent view on any site where a download is hosted.

THE SOFTWARE IS PROVIDED “AS IS”, WITHOUT WARRANTY OF ANY KIND, EXPRESS OR IMPLIED, INCLUDING BUT NOT LIMITED TO THE WARRANTIES OF MERCHANTABILITY, FITNESS FOR A PARTICULAR PURPOSE AND NONINFRINGEMENT. IN NO EVENT SHALL THE AUTHORS OR COPYRIGHT HOLDERS BE LIABLE FOR ANY CLAIM, DAMAGES OR OTHER LIABILITY, WHETHER IN AN ACTION OF CONTRACT, TORT OR OTHERWISE, ARISING FROM, OUT OF OR IN CONNECTION WITH THE SOFTWARE OR THE USE OR OTHER DEALINGS IN THE SOFTWARE.

Note that if you paid money for this software, ask for it back!